There is nothing quite so good for the spirit as a proper old-fashioned catch up with those who know you best, not least when recent events of a friend’s death and an unexpected house fire weigh heavily on your mind. And so it was I found myself on Saturday evening piling through bottle after bottle of some nice fizzy stuff with everybody’s favourite Head Porter, Paul Butterworth, and his delightful better half, The Headmistress.

It was a balmy evening in South Cambridgeshire and Paul greeted me with with open arms and that huge smile of his. He had an air of casual elegance about him, dressed as he was in a crisp white linen shirt and fashionably cut jeans.

“You look great!” I exclaimed. “Did The Headmistress dress you?”

“Yes…” Paul replied, seemingly amazed I was able to guess this.

We headed straight outside, through the managed tangle of wildflowers and crazy paving, to the small clearing at the bottom of the garden. Seating ourselves at the patio table that is only a little bit wobbly, Paul narrowly avoided smashing all three crystal glasses in his enthusiasm to pour drinks.

After glossing over the minor incident of my home almost burning to the ground, we celebrated the successes of PorterGirl and discussed the future. Paul expressed great enthusiasm for donning his bowler hat once more and I assured him that the readers would be delighted. Especially as there is the continuing assumption that there is a romantic connection both on and off-screen – neither of which is true but no amount of assertion on my part can convince the readership otherwise. Paul is openly chuffed about this and The Headmistress gamely suggests we should ‘give the public what they want’. However, this would involve drastic alterations to the plot and the disappointment of other characters, so perhaps things are best left as they are. 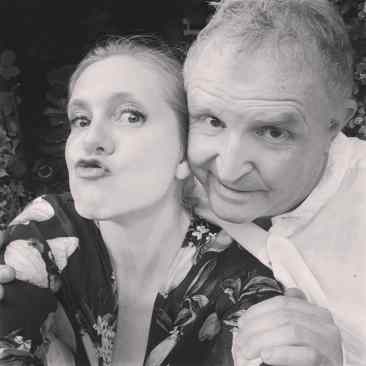 Paul regaled me with his eclectic tales from the world of television and film, as well as recent adventures taken with The Headmistress. He recounted fondly how is son, Josh, has recently graduated from Manchester University with a degree in film making and was already making waves in the industry with his short films. My little heart burst with pride – for it was I who gave him his first ever paid directing job when he took the helm for the initial PorterGirl book trailer.

As well as making me laugh until a bit of wee almost came out, Paul gave me sound advice about bringing PorterGirl to screen, not dating the wrong sort of chaps and how leaving Cambridge could be a wise move (more about that another time). But, for now, it’s back to work for me with renewed vigour.  The sudden and interesting developments to Project Britannia mean it absolutely must take priority right now, but with an evolution for PorterGirl in the pipeline and Who Shot Tony Blair? up in the air following the loss of our Chancellor of the Exchequer, this is perhaps for the best. Priorities, you see.

One of which is definitely drinking fizzy stuff with Paul, obviously.

47 thoughts on “One Night With Head Porter”