You know, there is nothing quite so lovely as living in the countryside, in a little property surrounded by fields.

Except for when those fields are all on fire.

Receiving the phone call that your house is on fire is quite a leveller. Had it not been for the sounds of sirens and people shouting in the background, I might have thought it was a joke – and not a very good joke, at that. There was confusion, then disbelief. Nothing could be done but to get home and see just what was going on.

On the winding B road, a police cordon was in place about three quarters of a mile from my house. A clutch of locals and their children – already over-excited about the first week of the summer holidays – hovered around the cordon, guarded by a lone police officer who looked as if he would rather be anywhere else. I don’t blame him. Working cordons and scene guard is rubbish, especially in this heat. I pulled up and a burly fellow in combats and a skin tight khaki t-shirt approached my car.

“Road’s closed, love. Where are you trying to get to?”

“That’s my house down there.”

He motioned for me to park up and waited for me to get out, before approaching the police officer.

“This lady lives down there – what’s going on?”

The air was thick with acrid black smoke, the greasy stench filling my nostrils and stabbing down my throat. The fields stretch for a good three miles around and there are (were?) little individual dwellings on all sides. Was everyone alright? The officer was unable to tell me anything useful. He wouldn’t say whether or not my property was damaged. So I waited patiently by the cordon.

The children whirled and scampered around, absolutely delighted at the drama. I stood quiet and calm while they squealed about having the biggest barbecue ever, how someone said that four houses were on fire, that there were sixty fireman fighting the fire (this, at least, turned out to be true). Before long, their parents realised I was waiting to find out about my house and made attempts to temper their excitement. People offered me tea, to come and wait in their houses. One little girl helpfully announced –

“Mummy, you should give her some of your big bottle of gin, you drink that when you’re sad!”

The poor mother was mortified, but it made me laugh. This was perhaps the first time I have refused tea and gin. I just wanted to know one way or another about my house.

The press arrived and wanted to take pictures and ask me questions. Burly combat chap sent them off with a flea in their ear and I was grateful. Usually I have no trouble standing my ground. Right now I was having trouble just standing.

I had no concept of time, but quite a bit of it passed. I chatted with the gathered spectators, occasionally bothered the police officer for updates, and watched as emergency vehicles went to and fro through the cordon. It would probably all be okay. The official sources of the police and fire service wouldn’t tell me anything, but finally a gang of tree surgeons returned from the scene. Burly combat chap (by now acting as part protector, part morale officer to my good self) accosted them and began a very proficient interrogation. I hovered within earshot, hoping to finally get some sort of information.

“That first one behind the big wooden gates? Yeah, that’s all gone, mate. It’s completely burnt out.”

And that was the moment I found out that I had lost absolutely everything. My hearing fuzzed and suddenly I was very, very far away from everything. My periphery vision closed in, like being in a dark tunnel. It is incredible what the human spirit can endure when it has to and the brain has a remarkable mechanism of shutting out extreme shock and trauma. A weird, thick calm descended. Ah, this is survival mode, I thought. This is good, make the most of this. Because when the adrenaline disperses you’re going to be a right mess.

The first thing I thought of was not the things I’d lost, but the things I’d got. Proof, if any proof was needed, that I remain a mindless optimist under any circumstances. I had my phone on me and even my phone charger in my bag. I had my wallet with bank cards, ID and some cash. I had my car, in the boot of which was my cricket gear. I had the very basics of rebuilding my life right here with me.

My laptop would be gone but the work is backed up. Losing the extensive handwritten notes, drafts and research was a damned inconvenience but not insurmountable. The hats. The vintage tea set. The boxes of photos I’ve had since the days well before camera phones and digital photography. That new dress I’ve only worn once, that’s a shame. Mementoes. Books. The things that make up a life.

The little girl appeared at my side, an enormous bottle of pink gin in her arms.

It was a tempting offer, but I had to keep a clear head and I would probably have to drive somewhere at some point. I made some phone calls. Friends offered support. In fact, offers of help of all and every kind flooded in from across the country. It would be difficult and it would take time, but everything was going to be alright.

And then it was, a couple of hours later, that I discovered that the tree surgeons had been wrong. The outbuildings were completely destroyed but the main house was more or less okay. The police officer confirmed (the first useful thing he uttered in this whole, epic episode) that there was some damage to the main building, the electric and gas were off, but it was mostly untouched by the fire. But I wouldn’t be able to get anywhere near it for several hours. The relief was indescribable – even for a loquacious writer so very fond of ad-verbs such as myself. Now, there was only one thing for it. So, obviously, I went down the pub and got shit-faced. 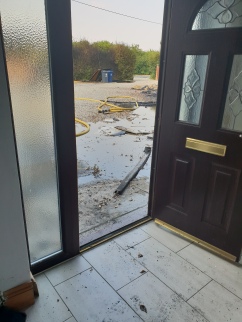 The next morning, I awoke with a ferocious hangover that was the least of my problems. Some windows had melted and smashed, so burnt stuff and debris from outside had merrily scattered itself all over the place. Although the fire didn’t make it inside, the firemen had been through the house, walking through soot and goodness-knows-what along the hallway and up into the loft. I mean, there was charred debris everywhere. Every single surface, every item, every nook was filthy with it. And the smell – oh, the smell was just horrendous. I started cleaning. And cleaning. In fact, I am still cleaning nearly a week later. I noticed that the edges of my rugs were singed. I spied a blackened scrap of paper sat atop a pile of notes on the desk. I’ve since been told that the whole place was minutes from igniting. But it didn’t. It’s still here and so am I. 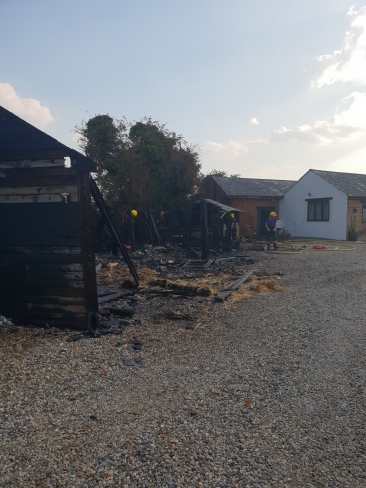 Part of the boiler melted, the toaster didn’t make it. Oddly, a random orange bucket sat defiantly among the wreckage of the outbuildings, completely untouched. That orange bucket is now my hero and serves as a symbol of fortitude against all odds. When the insurance fellow arrived in his van to assess the damage, he crashed into the post van parked in the driveway. I thought this was quite funny. Perhaps the place is cursed, now.

Things are a little way off being completely back to normal but they are well on the way. I never did have the messy breakdown I was expecting, post-adrenalin. I think the booze saw that off. But gosh, am I tired. Tired of cleaning. Tired of thinking. Tired of talking about the fire. I’m behind with everything and still trying to catch up. Mumsie was worried that I wouldn’t eat properly, but I can assure you that the best way to cope with a crisis is to eat your way through it. And deploy the stiff upper lip. Everything really is going to be okay.